2013: I learned loads of tunes and a lot of other things over the years from Con Cassidy and James Byrne and when I was asked to do a gig as part of the Sessions with the Pipers which are run by Na Píobairí Uilleann at The Cobblestone pub in Dublin (a great warm house for music), I included these two highlands and the reel An Tabac Daor (The Dear Tobacco) in my set. View the video here… 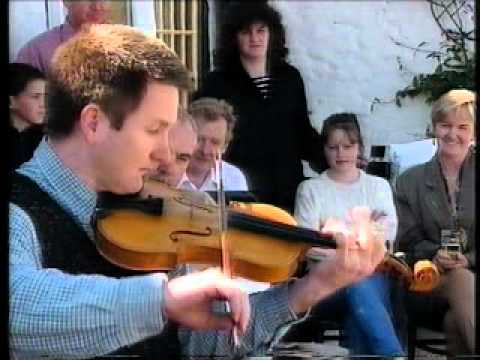 1996: This was filmed at 17th century Crosskeys Inn up near Toome, and it’s a famous house for music at all hours of the day and night. This short clip is clear evidence that traditional music really does get played during daylight hours, and even outdoors too! These are two nice Donegal reels, the first of which is called The Scowlin’ Wife and which I learned from the master fiddler Francie Dearg Ó Beirn of Cashel, Kilcar. and the second reel is The Spirits of Wine which I heard played on a fabulous recording of John Doherty that was made by Dr Alun Evans. When we were making the CD The Floating Bow which features selections from Alun’s remarkable collection of recordings of John, we used this reel as the opening track. John’s music is a constant inspiration to me and I love these two reels. 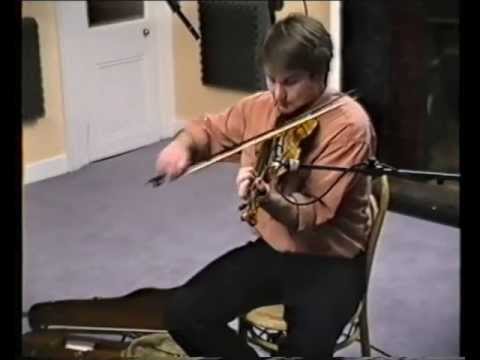 1993: In May 1993 I volunteered to be the ‘guinea pig’ for the new sound and video recording facility at Taisce Cheol Dúchais Éireann/Irish Traditional Music Archive which was then housed in 63 Merrion Square, Dublin, in the upper floors of the Royal Society of Antiquaries of Ireland. I can’t remember how many tunes I played, but I do remember enjoying sitting there playing away to my heart’s content while Nicholas Carolan dealt with all sorts of technical things that I didn’t need to know about! Here’s one of the tunes that I recorded – it’s called The Sporting Belles and it’s a version of a really popular tune called Sporting Nell. The version I play has elements of versions played by John Doherty and James Byrne, two of the greatest musicians I ever encountered, and they are never far from my mind.

Dermot Byrne, Dermot McLaughlin, Sean Byrne – A Donegal Highland and The Ewe with the Crooked Horn

1983: Here’s a set of highlands from the playing of John Doherty that I played with Dermot Byrne (accordion) and Seán Chon Johnny Byrne (guitar) way back in 1983 for a UTV television programme called From Glen to Glen. The show was presented by our friend Len Graham, one of Ulster’s (and Ireland’s) finest singers and a man who knows his music inside out. One of the highlights of the show for me was seeing an old black & white clip of my fiddle-hero John Doherty playing The Black Mare of Fanad on the fiddle. The two highlands that I play with the other Dermot are Peter Bailey and The Ewe with the Crooked Horn. Watch on YouTube...

Also from that television programme, here’s a lovely tune that we called The Signature Tune because we played this right at the beginning of the show! We learned this one from the playing of John Doherty as well – where would we be without JD? My brother Joseph is playing the uilleann pipes here with us, and the pipes are pitched around B. The sound of fiddle, flat pipes, accordion and guitar is very meaty, in fact you could almost eat it! Watch on YouTube...